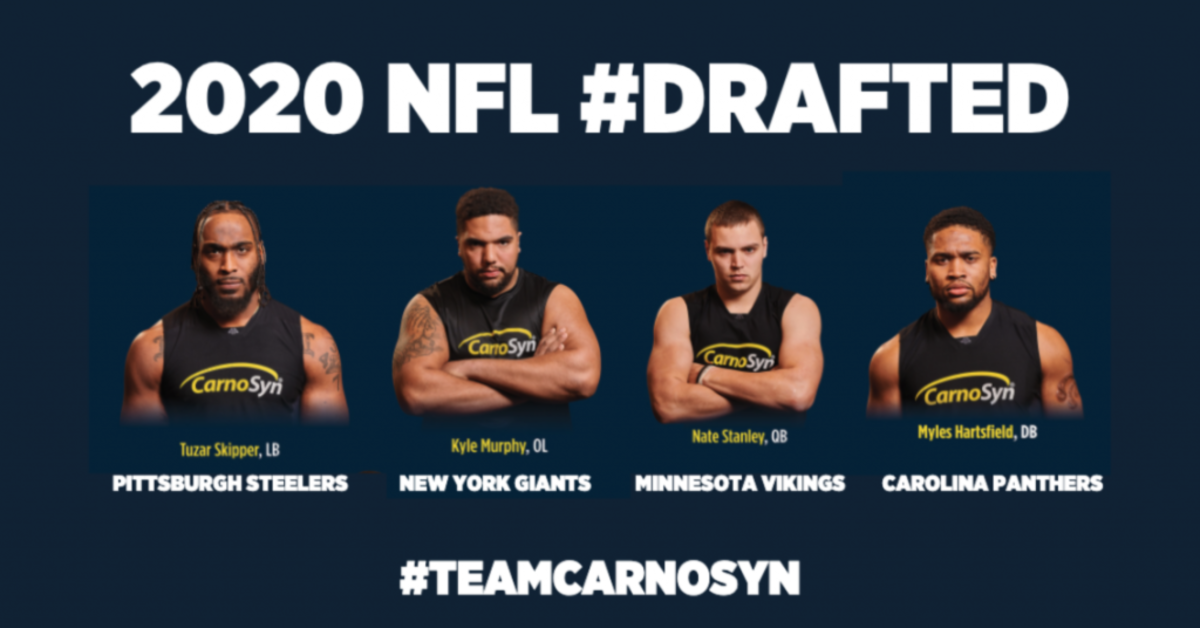 With the NFL Draft just behind us, we’re focused more than ever on perfecting performance—and we’re beaming with pride for the 2020 Team CarnoSyn® athletes who were picked up by NFL teams over the weekend. We want to congratulate Nate Stanley, QB, for being drafted by the Minnesota Vikings, Kyle Murphy, OL, for signing with the New York Giants, Myles Hartsfield, DB, for signing with the Carolina Panthers—and all while Tuzar Skipper, LB, continues to shine with the Pittsburgh Steelers.

This exciting success speaks to why everyone from NFL players to Olympians to the top sports nutrition brands trust only CarnoSyn® beta-alanine in their sports nutrition formulas. Prior to the NFL Draft, the 2020 Team CarnoSyn® athletes trained at TEST Football Academy, which is one of the nation’s top authorities in preparing collegiate football players for the biggest job interview of their lives at the NFL Combine. This intensive 45-day program includes a strict training, nutrition, and supplementation regimen that incorporates daily doses of both CarnoSyn® instant release and SR CarnoSyn® sustained release beta-alanine via Kaged Muscle’s line of products.

Why do Trainers & Athletes Trust CarnoSyn®?

When Kevin Dunn, TEST Football Academy Owner and CEO, explained why they chose to continue their partnership with CarnoSyn®, he said it’s to solidify the fact they’re providing the very best supplementation program available for their players. CarnoSyn® and Kaged Muscle®’s proven and banned substance-free products are recognized by Informed Sport, Informed Choice, and Aegis Shield and guarantee quality, potency, and purity.

“Only CarnoSyn® offers the patented, non-adulterated version of beta-alanine which accelerates muscle growth, increases strength and endurance by buffering lactic acid,” Dunn said. “We can’t risk using substandard products when so much is on the line for these athletes—those trying to go pro and every high school and college athlete competing for an athletic scholarship.”

The 2020 TEST Football Academy class consisted of 56 athletes—the largest class ever. In just 45 days, with the CarnoSyn® edge, they underwent a metamorphosis—46 of those athletes achieved a total fat loss of 216 pounds and a total lean body mass (LBM) gain of 257 pounds, all for a total body composition swing of 473 pounds. Of the 46 athletes post-tested to date, this averaged 4.7 pounds of fat loss and 5.6 pounds of LBM gain, with an average total swing of 10.3 pounds.

In terms of performance increases, TEST athletes have achieved an average increase of 2.5 inches on the vertical leap, 6 inches on the broad jump, 6 reps on the 225 bench press, and decreased 40 yard dash times by .17 seconds.

“What I like about CarnoSyn® is that it works.” -Tuzar Skipper, Steelers Linebacker

The inspirational journeys of Team CarnoSyn are chronicled to build brand awareness and foster education on the efficacious loading and dosing of CarnoSyn® and SR CarnoSyn® beta-alanine. The proven performance is evident in their stories and the before and after photos and the NFL performance. 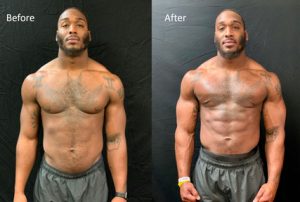 Tuzar Skipper earned 60 tackles, 8.5 sacks and 11.5 tackles for loss en route to third-team All-MAC honors as a defensive end at the University of Toledo in 2019. While preparing for his Pro Day at TEST Football Academy in 2019, Skipper increased his dose from 9.6 to 11.2 grams of CarnoSyn® beta-alanine. He put up an astonishing 30 reps on the bench press at UT’s Pro Day in March—a total which would’ve ranked second among all edge defenders at the 2019 NFL Combine, and finished off with an astounding 10-foot-7 broad jump.

Skipper started his NFL career as an undrafted free agent for the Steelers who made Pittsburgh’s 53-man roster coming out of camp but was waived shortly before their first regular-season game. The New York Giants poached him off waivers, and he totaled 3 tackles and a half-sack over his six games on their active roster. He was moved to the Giants’ practice squad in late October, and the Steelers snatched him back to their active roster, signing a two-year contract and cementing Skipper’s future in the NFL. 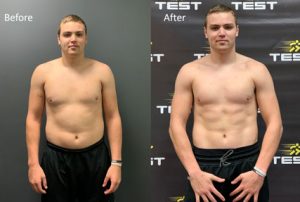 The Minnesota Vikings added depth to their quarterback position this past weekend in the 2020 NFL Draft by acquiring the No. 2 passer in Iowa history, Nate Stanley. At 6-4 and 240 pounds, Nate Stanley is the prototypical NFL quarterback with a strong arm and big frame. Stanley was a rock for the Hawkeyes offense, starting all 39 games in his final three seasons at Iowa. He ranks second all-time in Hawkeyes history for touchdown passes (68) and career passing yards (8,302). He was a proven winner in his biggest games, going 3-0 in three bowl games.

Stanley’s NFL Combine performance was highlighted by a 4.81 official 40-yard dash, setting a personal record that was nearly 2 tenths faster than his day one 40 time at TEST. 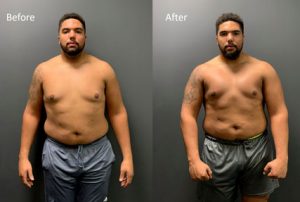 Kyle Murphy will make his debut in the 2020 NFL season as a free agent with the New York Giants. Murphy was named second team Associated Press All-American and received first team All-Colonial Athletic Association honors after starting 12 games at left tackle as a senior. The 6-3, 316-pound Murphy anchored an offensive line that allowed just 2.17 sacks per game despite his team averaging a league-high 42 pass attempts per game.

Murphy’s performance at the NFL Combine likely intrigued teams looking at adding quality depth to their roster. He checked the box at every combine drill and dominated his positional work displaying a huge upside to all 32 teams, especially coming from the FCS conference. 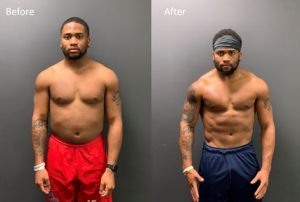 Myles Hartsfield will begin his NFL career with the Carolina Panthers as a free agent this year. Hartsfield was a four-year starter at Ole Miss, alternating between cornerback and free safety over 48 collegiate games. As a senior in 2019, he matched his 2018 season with 41 tackles. He also compiled 2.5 tackles for loss, a sack, and an interception. Hartsfield trained with TEST every offseason.

To learn more about Team CarnoSyn® or how you can elevate your brand with the product trainers and professional athletes trust, visit https://www.carnosyn.com/team-carnosyn/ .